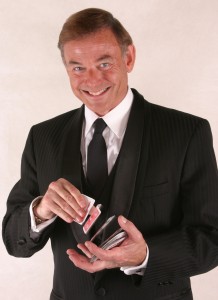 Jason Randal brings a unique and extensive entertainment background to executive education. As a magician and mentalist he’s made over 100 television appearances, becoming a regular guest on David Letterman, Craig Ferguson, and Ellen DeGeneres. A prolific creator of original routines, props, and technique, he’s opened for comics including Jerry Seinfeld, Don Rickles, and Dennis Miller, musical acts including Glenn Frey, Styx, and The Temptations, and performed before twelve heads of state including the last seven U. S. presidents.

A five-time national piano guild winner, Jason plays and composes for numerous instruments, recorded six CDs, and has written original scores for motion pictures, documentaries, and commercial projects. He is a cartoonist and painter, working in acrylics and watercolor, and a writer published in a variety of magazines. His three books include the two-volume Magic for Professionals and The Psychology of Deception.

In aviation, he is among a small number who have earned the FAA gold seal and master flight instructor ratings for single and multi-engine airplanes plus helicopters, and the FAA’s highest license level- Airline Transport Pilot. He owns a Pressurized Centurion airplane and a Turbo Enstrom helicopter.

Randal earned his first black belts under Chuck Norris. A master level 7th degree under hall of fame instructor Pat Johnson, he has been featured in Fighting Stars, Karate Illustrated, and Black Belt Magazines. He was an avid weight trainer and listed marathoner in Who’s Who in American Track and Field.

Randal taught stunts and choreography at Sherwood Oaks College, USC and UCLA, and was the subject of the documentary film, “The Training of Hollywood Stuntmen”. Television stunt-work included the Cannon and CHiPs series, followed by eleven motion pictures. His stunt coordinator credits include An Officer and a Gentleman, Breathless, The Fugitives, The Sky’s No Limit, Tequila Sunrise, and Pretty Woman.

As a Hollywood technical advisor, Randal prepared Paul Michael Glasser for his role as Houdini, Mel Gibson for Tequila Sunrise, Tom Cruise for Cocktail, William Shatner on TJ Hooker, and Robert Wagner for Hart to Hart plus conceived numerous celebrity segments for CBS Circus of the Stars.